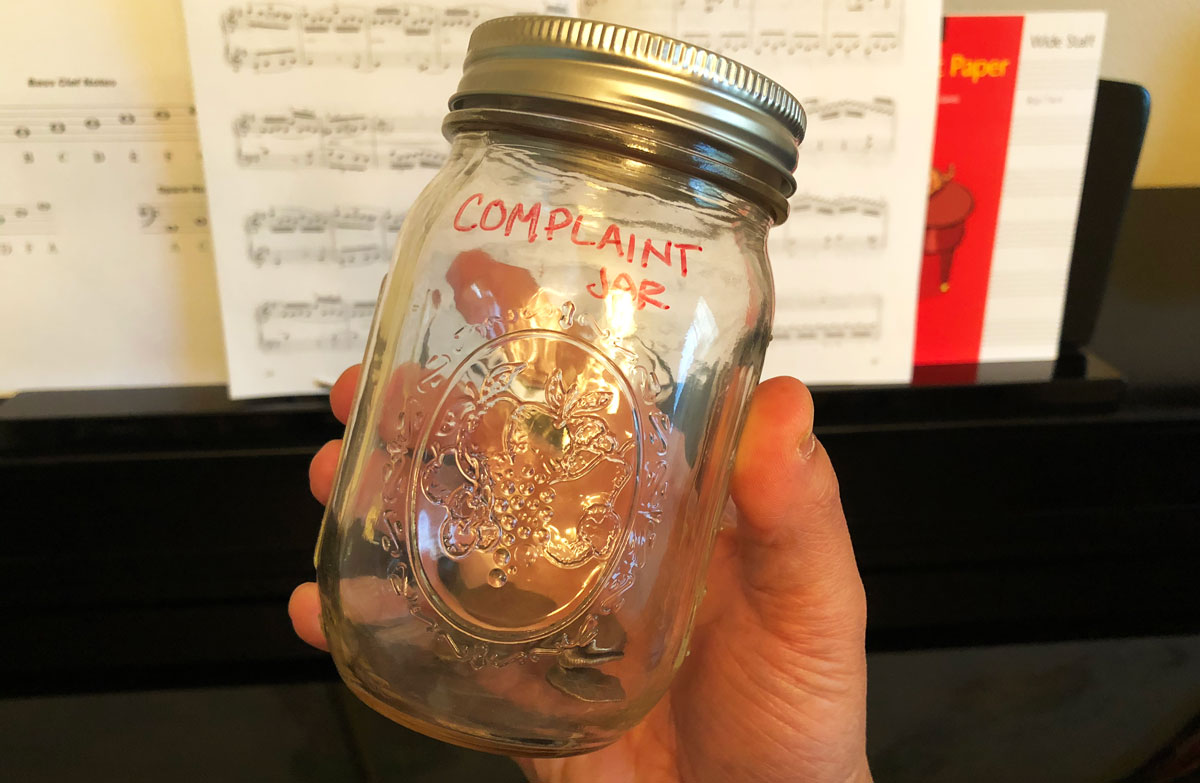 My wife April and I don't believe in complaining.

We get frustrated, absolutely, and there's nothing wrong with blowing off a little steam when trying to accomplish something and things don't go according to plan. But complaining – to verbally and mentally get annoyed to a point where it could bring ourselves and the other people around us down and delay our next steps forward? Yeah, that's not who we want to be, and that's not who we want our kids to be, either.

As parents, we try to instill this kind of thinking into our kids. When they are met with a challenge in life, we want to encourage them to think about how to get around the problem, creatively come up with potential solutions, and learn how to continue to move forward despite things not going to plan. We want them to still be grateful despite things not going the way they wanted.

We knew that a consequence / reward system could potentially train their minds to think this way, so when the kids were little (and by little, I mean around the age of 3), April and I introduced the complaint jar.

If we noticed one of the kids starting to complain about something without trying to solve the problem, or without showing gratefulness for what they already have, then we'd take a quarter out of their own money jar, and put it into the complaint jar.

On the flip side, if we noticed any of the kids stepping up to a challenge, or coming to a tough moment and instead of complaining, they tried to find the solution – even if they can't solve the problem and they need help – we take a quarter out of the complaint jar and we put it back into their money jar.

Examples use cases would be:

In the beginning, there was a lot of deposits made into the complaint jar, like 5 or 6 a day at times for each kid at times. Quickly, however, the idea seemed to sink in for them. I think quantifying how many times they complained in a clear mason jar was helpful, for sure.

In addition, no matter which direction the money flowed, we never just took the money and deposited it into a jar and called it a day. We explained, in a normal tone, why exactly we were taking money out of one jar and put it into the other. We never expressed anger when we were taking from their own jar, and we never overly expressed joy when going the other way, either. We thanked them for what they did, but we don't make a huge deal out of it because we wanted to support that this is what we expected, and it's normal. We just made sure the kids knew: this was how the money flowed, based on their own actions and behaviors.

Now that the kids are 7 and 10 years old, we no longer use the complain jar.

Do the kids still complain? Of course they do. But in our eyes, they are beyond the phase at which complaining could become a normal reaction for them and their personality. We see them actively solving problems when things get tough, and that's what we wanted for them.

We know things aren't going to go their way in life, and hopefully we've equipped them to think about how to solve problems, and even if they can't, and realize that they still have things they can be grateful for, even if they don't have everything they wanted.

Those are the kinds of humans we want to raise, in a world where it can be very easy to compare yourself to others, and quickly notice what they have, and you don't. We can't control the world around them and what they see, who they are with or what they're into, but we can help them learn how to navigate this world, and hopefully live happier lives because of it.